In the last few years, multiple scientific studies around the world have published articles referring to the incidence of interstitial fibrosis in the etiopathogenesis of Erectile Dysfunction (ED).

Although it is known that in vasculogenic ED the veno-occlusive mechanism responds to fundamentally hemodynamic factors related to abnormal venous drainage, the loss of tissue compliance of the corpus cavernosum with age, whether due to a decrease in smooth muscle cells or an increase in collagen fibers, can also be caused by a factor that increases progressively to a greater or lesser extent in all patients from age 50 on: interstitial fibrosis.

This interstitial fibrosis can be increasingly manifested following the presence of inflammatory factors, diabetes, arteriosclerosis and even post-traumatic factors, including the application of intra-cavernous injections. This results in impeding an adequate venous expansion, responsible for a firm penile tumescence during erection.

The Angio PL.U.S. color Eco-doppler, along with 2D SWE Elastography, is able to demonstrate not only the vascular limitations present in the ED, but also, quali-quantitively, the presence of interstitial fibrosis, either on a color scale or in kilopascal units, thus demonstrating the therapeutic response to treatment with low intensity shock waves.

Low intensity shock waves, by mechanotransduction, promote cell release of growth factors, including the VEFG, with vasculogenic action, the TGFß1, which promotes the trans-differentiation of rigid fibroblasts (seen in its vimentin cytoplasm) into flexible miofibroblasts (due to the presence in its cytoplasm of SMA alpha-smooth muscle actin), giving greater elasticity to the treated tissues, the eNOS (precursor of the ON), and the ON, with potent vasodilator action, among others.

As described, in the vasculo-fibrogenic Erectile Dysfunction there are tissue stiffness factors associated with fibrotic processes. These factors usually determine a mechanical-obstructive impediment for an adequate venous return, causing a circulatory stasis with production of varicocele and venous lakes at the level of the cavernous veins, visible with color echodoppler in flaccidity, at the level of the penile root.

The use of angio-plus color echodoppler together with the 2D SWE Elastography have the ability to show not only the vascular limitations present in Erectile Dysfunction, but also interstitial or plaque fibrosis in a quali-quantitative way, either on a scale of colors or in kilopascals, being able to demonstrate the therapeutic response to the treatment with shock waves of low intensity.

Low intensity shock waves, through the mechanism of mechano transduction, promote cell release of growth factors, among which are the VEFG, vasculogenic action, TGFß1, which promotes the transdifferentiation of rigid fibroblasts (by presence in its vimentin cytoplasm) in flexible myofibroblasts (due to the presence in its cytoplasm of alpha SMA-smooth muscle actin), giving greater elasticity to the treated tissues, the eNOS (precursor of the ON) and the ON, of potent action vasodilator, among others.

Using a Storz Medical Duolith SD1 low intensity shock wave equipment, the application of 6 sessions of 3000 focal waves each (1 to 2 per week), with a frequency of between 3 and 4 Hertz and with a power of up to 0 , 35 mj / mm2, the one recommended in the manufacturer's tutorial, has allowed in recent years to solve most cases of Erectile Dysfunction. 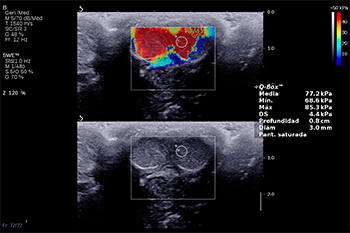 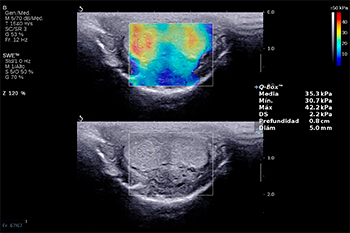 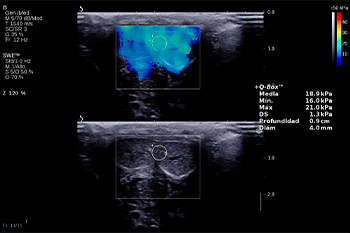 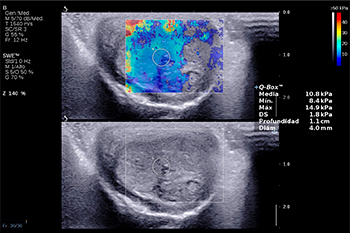 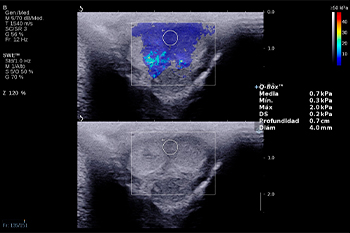