Due to traumatic factors or fragility of the venous walls, the occurrence of hematomas in the venous sinuses of the corpus cavernosum can follow a course that progresses from initial edema or hematoma to clot retraction and resulting in an area of diffuse or localized fibrosis. The latter will manifest in one or more plaques, with or without calcium deposits of varied density. Once these factors are localized, tensile forces will determine the direction and degree of curvature during erection that characterizes Peyronie’s Disease.

There are 4 (four) stages of Peyronie’s Disease: (1) Edema, (2) Diffuse unilateral fibrosis, (3) Fibroid plaque(s) and (4) Calcified plaque(s). The best results will be obtained the earlier the stage and the less extensive the lesion.

The predominant mechanisms involved will be in accordance with the evolutionary stage of the condition: At the Edema stage, revascularization will contribute to improved metabolic activity and reabsorption of the edema. At the stages of diffuse fibrosis or plaques, transdifferentiation will predominate, and at the stage of calcification, there will be an attempt to reduce perio-plaque rigidity, as well as revascularization promoting progressive calcium reabsorption.

Shockwaves act by stimulating cells to release “growth factors,” which produce the transdifferentiation of rigid fibroblasts into elastic myofibroblasts, revascularization of the corpora cavernosa, and significant vasodilation.

When the disease presents with pain, revascularization and vasodilation suppress it by improving tissue oxygenation, when there are fibrous plaques, the "transdifferentiation" of fibroblasts in myofibroblasts "elastizes" them by correcting the curvature, and when the plaques are calcified, the revascularization of the corpora cavernosa allows a rapid reabsorption of calcium, to later correct the incurvation.

By having a SWE SSI 2D Elastograph in Shockwave Argentina, we have the possibility to monitor the result of the treatments objectively, since beyond the clinical improvement, we can measure the tensile forces in kilopascals and in a color scale They produce the curvature.

The treatment, considered as a "non-invasive regenerative biosurgery" is painless, has no adverse effects, is performed in a few sessions and collaterally improves erectile function.

Progress of the treatmentin 5 sessions 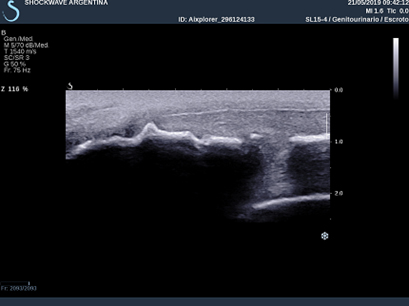 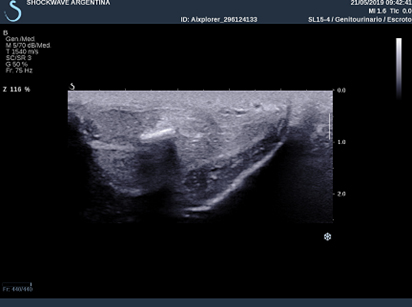 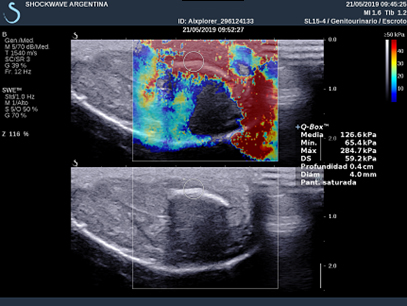 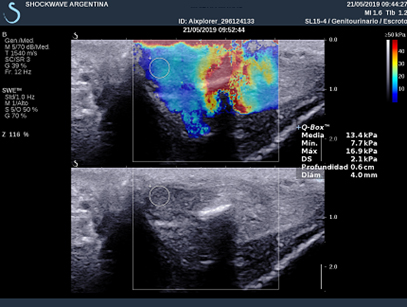